Although many believe the Abyssinian to be a direct descendent of the sacred cat of Egypt, the exact origin of the breed is obscure. Certainly, there is a strong resemblance between the modern Aby and the cat depicted in ancient Egyptian bronzes, paintings and the agouti coated cats found buried in the tombs. However, their lithe long body, large ears, long tail and distinctive coat also bears a striking similarly to the African Wild cats.

The overall impression of the ideal Abyssinian is an extremely beautiful, graceful, very colourful cat with a distinct agouti ticked coat.  It is this agouti ticking (flecking) that gives the Aby their rather special "wild cat” look. Abys are medium in size and regal in appearance. . The head is moderate, ears are large (preferably with tufts), and set as though listening. Eyes are almond shaped, and brilliant in colour. Recognised coat colours include, Tawny, Cinnamon, Blue, Fawn, Chocolate, Lilac and Silver, though the latter three colours are less common.

The Abyssinian is a busy, affectionate, intelligent and a very loyal cat. They love people and thrive on attention, interaction, and play. On your homecoming, expect to be greeted with enthusiasm and devote 10-15 minutes attention to your Aby. Although they love attention, they are not always constant lap cats, rather, they insist on participating in all family activities as a right. Whatever it is, an Aby has to be very involved. Abys are not vocal, having a small bell like voice to communicate.  They get on very well with dogs and can retrieve small objects Because of their dog like antics; they are often attractive to men who previously thought that they did not like cats. Being "people" cats, they can become very lonely if left for long periods alone, so it is often wise to have two as company for each other. 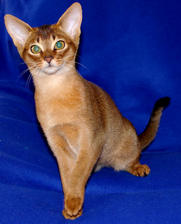 Thanks to Merindalee Abyssinians for this profile.