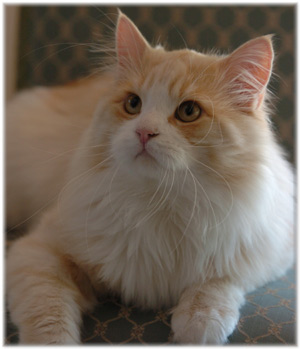 With a history dating back hundreds of years, it is surprisingly only in recent times that Siberian cats have become known outside . As with so many natural breeds, these cats were not initially regarded as noteworthy, despite featuring in Russian fairy tales and appearing in recorded history around the year 1000.

Little is known of its early origins, but Siberian cats traditionally appeared in all parts of the former .

At the end of the 19th century, a Siberians, known then as Russian Longhaired Cats, were imported into and appeared at the first cat shows, but by the beginning of the 20th century, they had vanished, overtaken by the more popular Persian.

Thousands of these cats were collected from many different regions of the former Soviet Union during the Second World War, following the Battle of Leningrad (now ) to deal with the city’s massive plague of rats.

As a result of the communist regime, after 1917 Russian cat fanciers were not able to engage seriously in the breeding and showing of pedigree cats until the 1980s, with the first Russian cat show being held in 1986 in Riga (now capital of Latvia). Serious breeding to standardise the type also began in the 1980s. Many believe the Siberian is the original ancestor of all our longhaired breeds, including the Persian.

International interest in these cats was revived by 1990 when they were imported by two breeders directly from into the , with the first kitten born on soil that year.

Perfected by its environment, every aspect of the Siberian is honed for survival in tough conditions: its topcoat is strong, plentiful and oily, while its undercoat is dense enough to keep out even the harsh unforgiving winds of .

This large, strong, sturdily built puss takes up to 5 years to fully mature, and attains a weight between 4.5 and 9kg. As in most breeds, the females are significantly smaller than the males.

The appearance of the Siberian is more reminiscent of a wild cat than any other breed. The impression should be of great strength and size, with excellent physical tone, as well as one of roundness and circles. The semi-long coat comes in all colours. The head is a modified wedge of medium size with rounded contours. Eyes are large, almost round, set wide apart and slightly angled, with colour varying from gold to green and all shades in between. Ears are medium to large, and wide. The plumed tail is medium in length; wide at the base with a blunt tip at the end. Large round tufted paws and an abundant neck ruff complete this attractive feline.

The personality of the laid-back Siberian is very affectionate, fun loving, playful, devoted and inquisitive, with a sensible dog-like temperament. It is very personable and wants to be around its owner, greeting them at the end of each day at the door, explaining their day to them! An alert and agile cat, it is a great leaper as well as an excellent hunter, making an indoor-only existence essential.

Siberians love laps and grooming. They have a great ability to assist their owners in every facet of life: chasing cursors on the computer screen, helping with showers and baths (they are fascinated with water!), watching telly, reading newspapers and magazines and then settling in bed, ready for owners to join them. Little ‘Gypsies’ by nature, they tend to help themselves to little bits and pieces around the house to play with, later to be found under furniture along with cat toys. You’ll never be alone with a Siberian in your home.

To top off a wonderful cat, the Siberian’s weatherproof, slightly oily coat helps to keep dander (dead skin flakes) to a minimum, which is great news to cat allergy sufferers. There has been tremendous success in these people having little or no reaction to the Siberian, giving a wonderful alternative to cat lovers who thought they would never be able to share their lives with a longer coated feline.

After years of admiring the Siberian in overseas publications, it was undeniably exciting when Mrs Marie Mahoney imported the first Siberians into in 2003. Marie a long-term Birman breeder wanted a robust cat breed without known congenital health problems, finding the perfect breed when a Russian judge visiting in 2001 introduced her to the fabulous Siberian Cat.

To ensure the purity of the breed, all breeders in desex all kittens prior to placement in pet homes.

Pet kittens are all sold between the ages of 12 and 14 weeks, being desexed, microchipped, fully vaccinated and registered for $800, with breeding/show cats costing $2000.